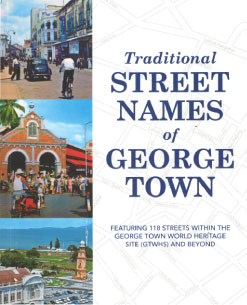 In the historic city of George Town, while one trishaw rider is being directed to ‘Lean Hwa Ho’ – the ‘stream of the lotus flowers’, a taxi is being directed to ‘Nyior Cabang’ – the ‘row of coconut trees’, both passengers actually wish to go to Leith Street, which now has neither lotus flowers nor coconut trees. As the ‘street of stonemasons’ or ‘Pak Cheok Kay’ or Acheen Street embraces its last few actual stonemasons, this publication seeks to document the delightful wealth of oral history in the form of local references used over the last 200 years to refer to our streets by occupations, trades, activities and local personalities.

These references were not only useful and pertinent, often they were droll and witty. Sometimes puns were used, occasionally they were even risqué. The historical significance of these traditional names was so valued that the first compilation appeared in 1900. This latest one features 118 streets within the George Town World Heritage Site and beyond, and attempts to put together the recollections of the dwindling residents of the inner city.