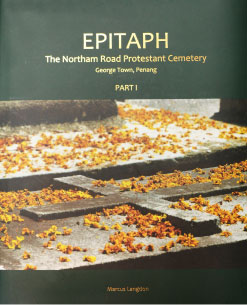 The Northam Road Protestant Cemetery is probably the first burial ground to have been established following settlement of Penang by the British East India Company in 1786. It is certainly the first Christian cemetery, catering to both Roman Catholic and Protestant burials.

This richly illustrated, limited edition two-part set is the most definitive work ever published about the Protestant side of this cemetery. Covering all 464 surviving memorials and tombs, with background stories to most of the identifiable persons interred there, it captures an invaluable and enthralling snapshot of the lives of Penang’s inhabitants during the settlement’s first 100 years. It also contains a list of 1,437 names of other persons known to have been interred in the same cemetery during that time.